Julia Stone has always loved learning and horses. While attending a college preparatory high school, she commuted each week to horse shows — including flying from her home in California to Florida every Thursday and back each Sunday during the Winter Equestrian Festival.

While juggling AP and honors courses, Julia approached one of her teachers to discuss homework before leaving for an upcoming show. Though well-meaning, the teacher told Julia she had to choose between being an equestrian and a serious academic.

“I’d always been striving to be class valedictorian, and hearing her say I had to make a choice was disheartening,” Julia said.

She still wanted to be both. On her flight to WEF, she continued contemplating the question. Her conclusion?

“I thought the idea that you had to choose between being a competitive equestrian and being a serious student was limited at best,” she shared. “Striving for excellence in both worlds became a challenge I was determined to overcome.”

As not just class valedictorian but having also finished her junior career winning the ASPCA Maclay Region 8 Final and excelling at national competitions, Julia has certainly overcome the challenge — and was well-deservedly named 2019 US Equestrian Junior Equestrian of the Year.

A Love for Learning

Julia’s passion for horses had a grassroots beginning that started when she was 6 years old and began attending many summer horse camps. “I was definitely the horse-crazy kid who collected Breyer horses and always wanted to arrive early and stay late at the barn, and simply spend as much time around these amazing animals as possible,” she said.

At 10, Julia decided she wanted to compete and began training with Courtney Cochran at Ridgewood Farm near her home in Santa Barbara, California. Julia’s love for learning and her pursuit of excellence took over from there — supported by her family.

“I am beyond grateful and have my parents to thank for the opportunities I had and the memories I cherish from this sport,” she said. “Like many horse show moms and dads have done in the past, my mom was by my side throughout the constant travel and the countless hours at the ring, being my rock and biggest fan, encouraging me and helping me keep things in perspective. With their help and sacrifice, of both time and money, I’ve experienced the best of both worlds! They gave me the opportunity to make my dreams a reality.”

Her parents always encouraged her to keep her grades up through the constant travel and time-consuming nature of the sport. Though it became more challenging as the years went on, it was always what Julia wanted, too.

“Learning has always been at the root of who I am,” she said. “From my first memories, I’ve loved to learn: from traveling to learning new languages — my favorite! — to reading every plaque in the museum because I didn’t want to miss any information, I’m almost obsessed with acquiring new knowledge.”

That love of learning naturally extended to her love of horses. She hung around the barn, learning about supplements and talking to vets and farriers, learning absolutely everything she could. After finding success at shows in California, she wanted to do more — and she would need more than pure knowledge to get there.

The summer she turned 16, Julia began training with Jim Hagman and Elvenstar Farm with the goal of competing in the medal and Maclay Finals. Jim could tell right away that Julia was incredibly bright and academically intelligent. She had talent, drive and supportive parents, but would she be able to learn the feel necessary to take her to the next level?

The first test was to see if she could adapt to a new horse. Jim had imported Let’s Go, known as Pedro, as a 6-year-old, and thought he might prove a good match for Julia, though they were both new to the level of competition they would be pursuing.

Their first show together was also the first WEF for each of them. “I still remember the day I walked onto the show grounds for the first time,” Julia said. “Everything was immaculate and I was so impressed by it all. Not only did I learn so much from my time competing there, I also found it so inspiring to see the sport’s greatest athletes — horse and human — and trainers sitting next to me eating lunch, as well as being able to watch them compete firsthand.”

Julia would fly in late at night and be on a horse by 6 the next morning, working with Jim day after day through the circuit. Though things didn’t go particularly smoothly right out of the gate, by the end of the season, Pedro and Julia had formed a winning bond and ended the year by winning the 2018 USHJA 3’3″ Jumping Seat Medal Finals – West.

“The most special part of our relationship was that we learned so much together, really becoming a team, and we were able to develop a deep connection through our many shared firsts,” Julia said. “Pedro taught me so much about what it means to be a true rider, as well as how to train a horse, have patience and trust the process, all important milestones to learn in riding.”

The first year showing was successful; the second year was remarkable. In 2019, Julia and Pedro claimed the competitive Region 8 Maclay Championship, with hopes of putting in good rounds at the national finals. More remarkable than any result was Julia’s show of character.

Not Just a Good Rider

At the 2019 Maclay Finals, Julia didn’t even get over the first jump. At the last moment, they discovered an infection under Pedro’s skin that would take eight weeks to rehab.

“I felt terrible,” Jim said. “That never happens — my kids don’t go to nationals and not jump around. She was a solid winner at Regionals, which is really hard. But she and her mother stayed there the entire day, watching their barnmates.”

At that point, Julia’s mother approached Jim and said, “I just want you to know, we don’t look at it from today: We look at the journey, and it’s been incredible.”

“And she meant it,” Jim said with awe. “This young lady is so quality, you can’t believe it. But it’s real, and I’ve taught lots of kids — more than many, all over the country. Julia’s mentality is so sincerely, outstandingly unique and special, I can’t even describe it. Julia has the emotional intelligence to know what matters most and put it in the proper perspective, and she was able to learn and climb the ladder quickly because of that capability.”

“In my equestrian experience, and especially training with Jim, it’s always been about seeing the possibilities in life instead of the limitations,” Julia said. “Jim has been encouraging about setting my standards high in all parts of life and always having an ambitious vision, be that in education or riding. For me specifically, this included overcoming the reality of fixed resources — in both time and money.

“I gained strength in knowing that the fact that I had an opportunity to ride a horse of Pedro’s quality, to learn and compete at WEF and on top of it to be competitive, was — for me — accomplishing the impossible. I thought that if I could accomplish this with one horse, then there was no reason I couldn’t strive to be the very best in academics as well.”

After graduating from high school as valedictorian and winning the Los Angeles Hunter Jumper Association’s Horse Mastership Scholarship competition, Julia’s last year as a junior rider ended with the national equitation finals at indoors — while she was attending Georgetown University in Washington, D.C.

In January, Julia moved the entire audience at the US Equestrian 2020 Annual Meeting with her heartfelt and eloquent Junior Equestrian of the Year acceptance speech. Julia felt the award recognized her passion for horsemanship, putting the horses first as well as the importance of grassroots or local equestrian education.

“It was the proudest moment of my life!” she said. “I was overwhelmed with so many emotions. I felt excited, grateful and humbled all at the same time. Being recognized for my equestrian experiences outside of the show ring on top of those inside validated my continual emphasis on education, and encouraged me to keep reaching out and inspiring younger riders to be more than just competitors.”

In speaking about the award, as with any other success she’s had, Julia is quick to genuinely thank those who have helped her along the way, from her parents and the Elvenstar team to the trainers, grooms, show officials, organizers, volunteers, vets, farriers, breeders, announcers, stewards, judges and more.

“Recognizing Julia as Junior Equestrian of the Year was so appropriate because she has it all — she’s the real deal,” Jim said. “The whole collective journey with her and her parents is something I’ll treasure the rest of my life. It certainly will never be outdone.”

But the journey is only beginning.

When Julia came home early from Georgetown due to COVID-19 and wanted to ride at Elvenstar again, Jim had a special opportunity for her. Show jumper Georgina Bloomberg had sent a few of her homebred jumpers that needed riders, and Julia accepted the challenge.

“Julia had never ridden jumpers, and I put her on a horse that’s a jumper jumper — blood, sensitive,” Jim said. “He loved her, and I was so proud of her adaptability — she wasn’t just thinking, she was really feeling. To see her work with that horse gave me real joy, to see she’s come to the point in her life that she’s a really good, well-rounded horsewoman.”

She’s also well-rounded when it comes to disciplines, competing in Western events, where she enjoys the vastly differing cultures. “I enjoy being around horses as much as possible, and the different disciplines translate into more time with horses!” she said.

When she’s not in a saddle of one type or another, Julia is usually found studying. She’s majoring in international political economy at Georgetown’s School of Foreign Service, which fits her love of languages and her desire to make an impact on the world for good.

What does the future hold for Julia?

“Horses will definitely stay in my life, that’s for sure!” she said. “I want to strike a balance between my professional life, potentially in international finance and sustainable economic growth in developing nations, and maintaining my passion for horses and competitions. I’d also like to give back to the sport in some way, perhaps supporting USHJA and US Equestrian’s efforts to mentor and educate the younger generations of riders.”

Just as he’s always encouraged her to pursue high standards, Jim wouldn’t be surprised if Julia’s impact goes far beyond the equestrian community.

“I say that she’s the Future President of the United States, and I mean it because that incredible potential is there,” he said. “She’s just exceptional.” 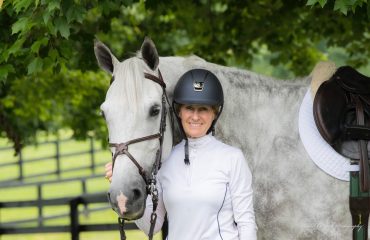 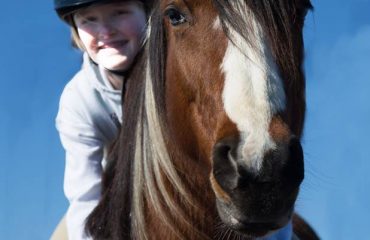