I was born and raised in Melbourne, Australia. Being a very big-city-like setting, the last thing you’d expect to encounter would be a horse. However, from my earliest memory, and me being me, I could think of nothing but horses.

I have no idea what provoked this passion, but I would spend days obsessing over how I could ride. As I got a bit older, I’d take whatever chance I could find to even be near horses, let alone ride one.

By about 7 years old, I hatched a plan. I sat in my room and made a list of everything I could do to earn money. I’d take whatever job I could find to earn enough to buy my own horse. I didn’t care how long it would take or how many newspapers I would have to deliver to make my dream a reality. My parents were very supportive, but insistent that if I wanted a horse, I would be the one paying for a horse.

I look back now and that’s one of the best lessons they could have ever taught me. It was a long haul, but by my last year in high school I had finally done it! We were off horse shopping.

The amazing things that have unfolded since that day are the things of dreams. Through horses I’ve been invited to travel the world and compete in nearly every discipline imaginable — from hunters and jumpers to barrel racing and roping to mounted shooting and polocrosse. But for me, the biggest thrill of all has been the discovery of polo.

From the moment I stood field side at what looked like a green ocean in front of me and felt the thunder of eight horses move the ground beneath my feet as they raced after the ball at a full gallop, I knew this was the sport for me. As Lyndon Lea, the famous winner of two U.S. Open Championships with his Zacara Team, said, “From the first second I played, it was like a shot in the veins. I was hooked!” Or as Sylvester Stallone, the actor and polo player, said, “It’s like playing golf in an earthquake.”

No two people describe it the same, but the overall effect is similar … awesome!

The polo life is great and involves as much travel as the best show jumping circuits in the world. Over the last year, I’ve had the pleasure of playing 26-goal polo in Palm Beach, Florida, with the best players in the world on the Crab Orchard team. To be selected to play, especially as a woman, is a very high honor. I suppose it’s true that hard work and dedication do pay off.

After playing in Palm Beach, I trailered down I-95 to Miami to play in the International Beach Polo Association’s 10th annual Beach Polo World Cup. From there, I headed to Texas to play polo at some of the most beautiful farms, then to California to play for the Hollywood Polo Team versus the Beverly Hills Polo team in Hollywood. It was a rather star-studded event as you’d expect in Los Angeles and I loved it. After that, it was on to San Diego and Temecula Polo Club.

As I write this, I’m in Hawaii touring the islands, going to rodeos, playing polo and getting the chance to mix the two childhood loves of my life — horses and surfing. Who would have thought that if you follow your heart, you really can be living the dream!

I look forward to sharing my ride with you in my new Sidelines column, and hope you’ll share yours with me!

About the writer: Kerstie Allen is a native of Melbourne, Australia. Her passion for horses has taken her on a worldwide adventure exploring and mastering nearly every discipline in the equestrian world and opening doors of opportunity for women everywhere.

Kerstie as a little girl. 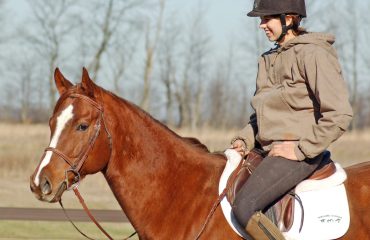 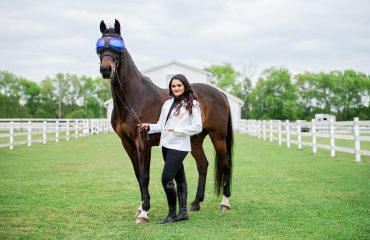 Aubrey Torrez Believes in the Underdogs