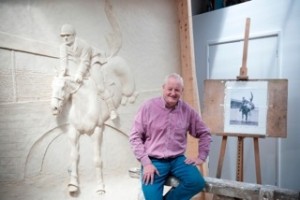 Douglas Bunn (1928-2009) was the founder of the All England Jumping Course, and one of the biggest innovators in the sport of showjumping. Now a memorial sculpture featuring Douglas on his most famous horse is going to be unveiled during the Hickstead Derby meeting.

The sculpture – in the form of a ‘relief’ – has been created by famous artist Philip Blacker, who is a friend of the Bunn family. It is the first time Philip has worked with this type of art form, which is somewhat apt for a tribute to Douglas Bunn, one of equestrianism’s great pioneers.

“The art of relief sculpture has rather fallen out of use in recent years and so I was keen to do something that was unusual,” says Philip. “Making a relief on this scale was not without its challenges, partly because of the foreshortening effect of the horse and rider coming towards one at such an acute angle. I am pleased with the result now it has been cast in stone.”

Philip has created some of the most iconic sculptures in equestrianism, including life-size statues of Red Rum, Desert Orchid, Best Mate and Persian Punch. As Douglas had been a friend of Philip’s father, General Sir Cecil ‘Monkey’ Blacker, and had owned several pieces of Blacker’s artwork, the Bunn family felt Philip was the perfect choice to create a memorial statue in memory of their father.

“I was delighted to be asked to create the memorial because I knew Douglas when he was alive and I was a great admirer,” says Philip. “I felt that rather than have just a normal statue it would be better if it was in the context of Hickstead. The solution I felt was a relief panel ofDouglasjumping a Hickstead wall on Beethoven, with the grandstand in the background. I thought it was important to portray him in action in his heyday, and I hope the Bunn family think it is a fitting tribute to Douglas.”

The relief features an image of Douglas riding his beloved Beethoven. Beethoven remains to this day the only British horse to ever be crowned World Champion, when David Broome rode him to victory at La Baule in 1970. “Bootsie”, as he was known in the stable, was famous for his big white blaze, and for flicking his tail high in the air when he jumped.

A successful showjumper in his own right, Douglas had dreamt of creating a world-class sporting venue to rival the best showgrounds in Europe. In 1959, he bought Hickstead Place, a manor house dating back in parts to the 13th century. With the purchase of 100 acres of surrounding land in Sussex, he had found the venue for the realization of his dream — the All England Jumping Course. In May 1960, the first horse show was held at Hickstead.

The following winter, having seen a newsreel of the Hamburg Derby, Douglas Bunn flew out toGermanyto see the course for himself. He arrived in a snowstorm and set about measuring the dimensions of all the permanent obstacles, including the Derby bank — which he planned to replicate back at Hickstead. It may be due to the additional snow lying on top or perhaps it was due to Douglas’s own ambition, but Hickstead’s bank ended up a good six inches higher than its Hamburg counterpart.

The Hickstead Derby has become one of the most famous classes in showjumping, and is now in its 52nd year. As well as the Derby meeting, the All England Jumping Course also hosts the Longines Royal International Horse Show, which features the Longines King George V Gold Cup and the FEI Nations Cup™ of Great Britain.

Following Douglas’s death in 2009, his family took over the running of the showground, and Hickstead continues to go from strength to strength. The International Arena went through a £500,000 redevelopment in 2011, and a new national show – the All England Jumping Championships – was added to the calendar last year.

It’s been more than five decades since Douglas Bunn first dreamt of opening a showground in West Sussex, and his legacy lives on to this day. The memorial statue at Hickstead will be unveiled during this year’s British Jumping Derby Meeting (21-24 June).

“The All England Jumping Course was my father’s proudest achievement, so it’s fitting that this memorial statue should be sited right next to the International Arena so that all the visitors to the showground will see it as they arrive,” says Hickstead director Lizzie Bunn.

“Dad was a great innovator, creating the sport of Team Chasing as well as the much-imitated Eventing Grand Prix,” Lizzie adds. “But he will always be best remembered for founding the Hickstead Derby, so we wanted to unveil this memorial during this year’s Derby meeting.”

The six youngest Bunn children – Edward, Lizzie, John, Chloe, Daisy and Charlie – are all directors at Hickstead. Edward and Lizzie run the showground throughout the year, while the others combine their roles at Hickstead with other careers.

John is Managing Director of the family’s other business, Bunn Leisure, and Chloe (herself a former showjumper) runs Breen Equestrian at Hickstead with her husband, Irish showjumper Shane Breen. Daisy combines her Hickstead duties with her own photography business Honeybunn Photography and Charlie his with being an actor.

Douglas’ eldest three daughters, Claudia, Lavinia and Theresa, have also taken a keen interest in Hickstead, and his ten grandchildren are all keen riders.

On Saturday 23 June, the entire family will gather at Hickstead to formally open the memorial statue, alongside artist Philip Blacker and Beethoven’s rider, showjumper David Broome. 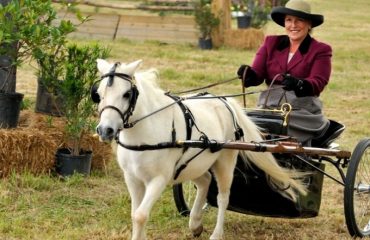 A Day In the Country Continues Traditions 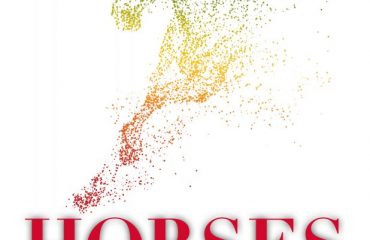 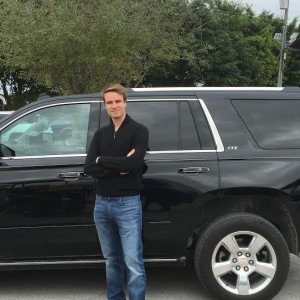