SAUGERTIES, NY (October 19, 2010)–Less than two weeks after announcing plans for a $100,000 Hunter Final for its popular 3’3” Devoucoux Hunter Classic, HITS has decided to quintuple the purse and make history again by offering the richest hunter class in the sport of show jumping.  The $500,000 HITS 3’3” Hunter Prix Final will be a culmination of more than 30 Devoucoux Hunter Prix qualifying classes offered at all HITS horse shows from January 19 through September 4, 2011.

The Final will be take place September 10-11 as part of the Million Weekend in Saugerties, New York.   “Our first announcement about the 3’3” Hunter Final generated a lot of interest and excitement from around the sport,” said Tom Struzzieri, HITS President and CEO. “It became clear that the demand for a groundbreaking event for hunters is something the sport is hungry for and we needed to think bigger, so we did. We have set this class up as an opportunity for juniors, amateurs, children and adult riders to have a chance to be competitive. As I said before, our goal is to create an environment that does not currently exist for the large majority of the sport and I think with the combination of this unprecedented prize money and the unique format of this class we have achieved both.”

Struzzieri went on to explain that the $500,000 HITS 3’3’ Hunter Prix Final and all qualifying classes will be formatted as a traditional Hunter Classic with fences set at 3’3” with no higher options and beautifully decorated jumps without any spooky intentions. No bonus points will be awarded and jumper-type horses will not be rewarded based on bravery alone.  “This class will bring it back to the hunters. I envision that Adults, Pre-Greens, Juniors, and Amateurs can all be competitive in this division and Final, with no distinct advantage at the outset other than a good ride and a talented horse,” he added.

“It will not be a ‘given’ before the class begins.”  Similar to the Pfizer Million, it will be the rider who qualifies for the class. Riders will need to qualify by showing in a minimum of five Devoucoux Hunter Prix classes in order to become eligible for the Final. Once eligible, it will be a rider’s leading horse based on points from their top five finishes that will place them in the Rankings for the $500,000 HITS 3’3” Hunter Prix. Details for exactly how the points will be awarded are still being finalized; however, it will a formula that takes into account the amount of prize money offered as well as the number of horses in the class.  Archie Cox of Brookway Stables in Los Angeles, California is a well-respected hunter rider and trainer, and longtime customer of the HITS Desert Circuit, who was thrilled of the most recent news coming out of HITS.  “People in California are really excited about the opportunity to compete for $500,000 in prize money and are already making their winter circuit plans with qualifying for this Final as one of their primary goals,” said Cox. “The opportunity to compete for that much money is just amazing. I think that the structure of having one horse per rider really invites many more junior and amateurs to participate in the class. My students and I are looking forward to competing in the classes throughout the winter circuit and hope to qualify for and participate in the Final come September.”  Also to be determined is how many riders will make the final lineup for the class and if the Final will be a two-round classic, like the Devoucoux qualifiers, or a three-round classic. A rider may only ride one horse in the Finals, and like the Pfizer Million, the rider can select any horse of his/her choice.  Riders will be able to start earning points for the $500,000 HITS 3’3” Hunter Prix Final this January at the HITS Ocala Winter Circuit in Florida, the HITS Desert Circuit in Thermal, California, and the HITS Arizona Winter Circuit in Tucson, Arizona, where each week a qualifying Devoucoux Prix will be offered.

The 2011 HITS Culpeper spring and summer show series will feature five qualifying Devoucoux Prix classes from April through August, while HITS Saugerties will offer riders seven chances to qualify for the all-new $500,000 HITS 3’3” Hunter Prix Final during Weeks I through VII.

HITS also plans to offer a Wild Card class during Week VIII at HITS-on-the-Hudson where one lucky rider, not already qualified, can earn a spot in the Final.

More information for the $500,000 HITS 3’3” Hunter Prix Final, including complete qualifying specifications, will be available online in the coming weeks. The HITS 2011 winter show season kicks-off with the HITS Ocala Winter Circuit on January 19 and runs through March 20. On the west coast, the HITS Desert Circuit in Thermal, California will take place January 25, through March 13, while the HITS Arizona Winter Circuit will run six consecutive weeks from February 2, through March 13.  All HITS Winter Circuit Prize Lists will be available by mid-to-late October. To request a prize list, please visit HitsShows.com. 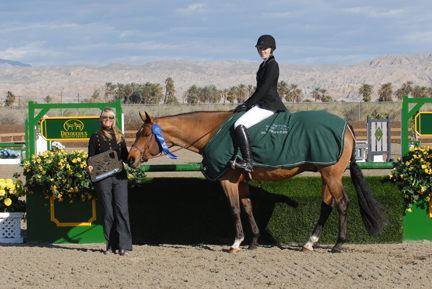 Tack Et Cetera will be set up at the Coconino Horse Trials in Flagstaff!