Gladstone, NJ – Rain greeted the competitors on the first day of the 2011 Collecting Gaits Farm/USEF Dressage Festival of Champions but the quality of the competition shone through. The Grand Prix National Championship headlined the day, and the rain was at its heaviest during the class. Due to the conditions, the Prix St. Georges – which was scheduled for this afternoon – has been postponed until Friday, which will push the Intermediaire I Championship back one day.

Steffen Peters rode Ravel like it was 70 and sunny (which it probably was at their San Diego base) and between the raindrops put in the effort that the fans were expecting from the 2008 National Champions, the 2009 FEI World Cup Dressage Champions, the 2009 CHIO Aachen Champions and most recently, the Individual Bronze medalists from the 2010 Alltech FEI World Equestrian Games. Peters rode according to the conditions. 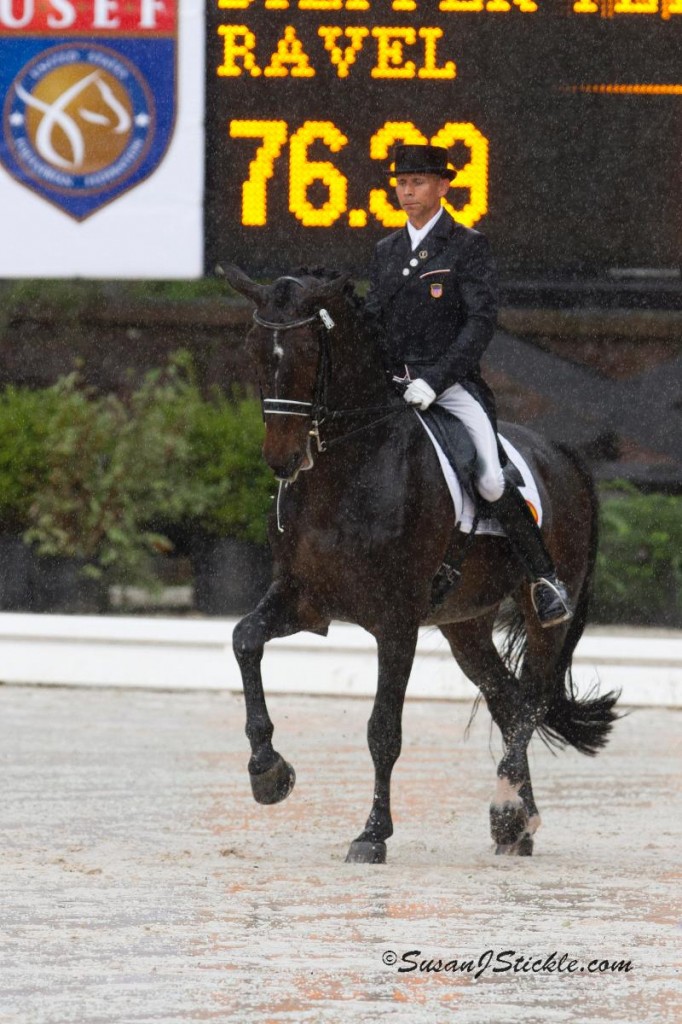 “I rode a little more conservatively,” said Peters. “I went for a clean test and it worked out great. He’s such a trooper.”

The 13-year-old Dutch gelding owned by Four Winds Farm and Akiko Yamazaki made his first competitive appearance in Gladstone and rose to the historical atmosphere. They scored 77.660% in a valiant, yet somewhat soggy test. The footing in the Dick and Jane Brown Arena was redone in 2010 and held up admirably in the conditions. The New Jersey area has been plagued by flooding and incredible amounts of rain between Hurricane Irene and the remnants of Tropical Storm Lee.

“I really trusted the decision that they made,” said Peters. “It was safe, not slippery. I think the horses felt a little stuck. But they weren’t slipping at all. The main concern is safety and the decision to call it safe was very good.”

Peters plans to give Ravel a well-deserved break after Festival. He has Weltino’s Magic in the Intermediaire I Championship vying for a spot on the Pan American Games Team, but Ravel will have some time off and prepare for the World Dressage Masters in Florida in January. He then has his sights on the FEI World Cup Final and then the 2012 Olympic Games next summer in London.

The 2010 Grand Prix National Champion will not be able to repeat their sweep of all three Grand Prix classes in 2011, Tina Konyot and Calecto V had to settle for second in the Grand Prix, in the first round of the 13-year-old Swedish Warmblood’s title defense.

“He was wonderful,” said Konyot. “I had a little rider error. I should have had rubber reins. I had a very, very difficult time holding the reins. He was very, very good – there were some mistakes in the changes. But I was happy with the piaffe/passage tours and pirouettes. I was a bit more conservative in my riding.”

Konyot (Palm City, FL) and Calecto V were on the fourth-placed team at the 2010 Alltech FEI World Equestrian Games with Peters and Ravel, it was Konyot’s first team appearance. Her plans for next year include a possible bid for a FEI World Cup Final spot and then everyone’s attention will be on the Olympic Games.

“Next year is an important year for all of us,” said Konyot. “We need to get out there and compete against the best.”

Like Peters, Shawna Harding has a horse in the mix for the Pan American Games, but first, she rode Come On III to a third-place finish on a score of 67.872% in the Grand Prix.

This is Harding’s second consecutive Grand Prix National Championship at Gladstone and she is proud of how much her horse has grown up in a year.

“I’m really happy,” said Harding. “We had a much better ride than last year. We had mistakes in the changes and then he tripped before the ones but then he got them, the footing did wear him down but they are doing the best they can with the circumstances.”

Roffman Rises to the Occasion with Beemer in Brentina Cup

The Young Adult Brentina Cup National Championship led off the competition and riders from the age of 20-28 set the stage for a great four days of dressage. As it turned out, they had the best weather of the day. 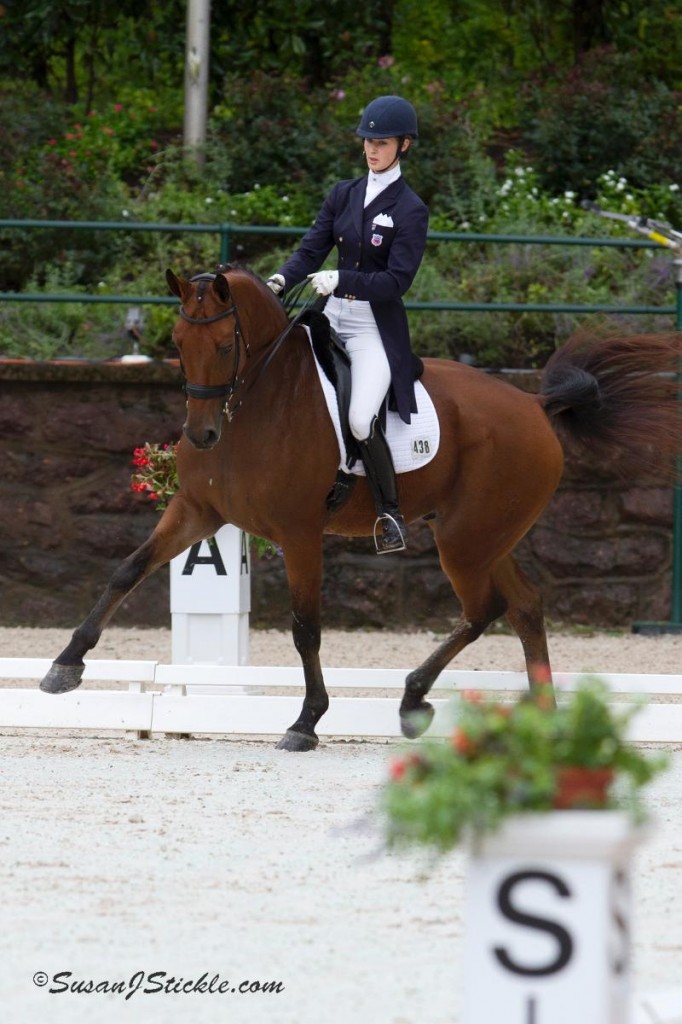 Caroline Roffman set the mark on Beemer, they scored 65.179% for their test which gave them the lead over Heather Beachem and Windsong and Olivia Lagoy-Weltz on Rifallino.

Roffman (Wellington, FL) has been on a National Championship Tour this summer, she just returned from the Markel/USEF National Young Horse Dressage Championship, and has had to become adaptable as she has only had a few days to be reacquainted with Lars Petersen and Global Dressage Sale’s 13-year-old Oldenburg gelding.

“My horse really put his best foot forward in the trot work,” said Roffman, who also won the 2010 FEI Rising Star Award. “I was happy with the piaffe and passage. The canter tour got a little messy which was totally my doing. The mistakes were all mine, so I am happy with him.”

Roffman is looking to break out with a win after finishing second twice in the 2011 Markel/USEF National Young Horse Dressage Championships and a third Reserve Championship in the Developing Horse Championships presented by the Dutta Corp. and Performance Sales International.

“I was in Chicago for 10 days,” said Roffman. “I’ve ridden him about five days in two and a half weeks. It’s a little hard to transition from young horses – it’s a different ride, a totally different thing.”

Roffman is one of the most consistent riders in her age group in the country but a National Championship at Gladstone has eluded her. She is contesting the Brentina Cup for the first time – she just turned 23.

“He’s a great horse and I’m lucky to have him,” said Roffman. “He’s a sales horse and he’s shown in the Grand Prix in open CDIs. I honestly didn’t think I would get to ride him here, but he didn’t sell.”

Beemer has been catching the attention of the judges since he was a Young Horse – eight years ago he was the USEF 5-Year-Old National Young Horse Champion.

Beachman (Alpharetta, GA) only began riding dressage three years ago when at 19, she made an unusual switch from the hunter world.  She is a working student for Karen Lipp and rode at Gladstone in 2010 in the Young Rider division. With her mount, the 15-year-old Hanoverian gelding Windsong, she is making the transition to the Grand Prix and they scored 63.897% for their efforts.

“This is mine and my horse’s first year at Grand Prix,” said Beachman. “‘Puff'” is a match made in heaven.”

Rounding out the top three is Lagoy-Weltz on Rifallino. This pair has trained together up to the Grand Prix, and the 13-year-old Dutch Warmblood has been learning Grand Prix for less than year. At 27, Lagoy-Weltz (Versailles, KY) is in her last year of eligibility for this Championship.

“I feel lucky to be able to do it this year,” said Lagoy-Weltz. “It’s an excellent way for young riders to transition – I didn’t do Young Riders so this is my first time doing something like this… It is a really good program. My horse learned all the Grand Prix in one year, so we’re still learning and this is a group of people in basically the same situation.”

Competition continues on Friday at 8:00 a.m. and complete coverage and LIVE VIDEO FEED on Friday are available here: http://usefnetwork.com/featured/2011FOC.

To attend in person, please visit http:www.uset.org for directions to the venue. 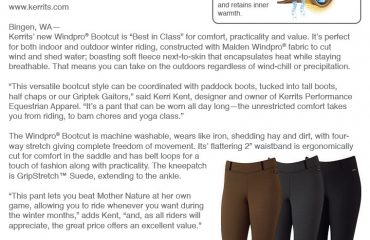 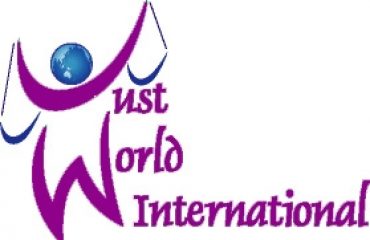