Greer Hindle, who rides with Donald Cheska, showed she has real talent in the Big Eq classes at the Horse Shows by the Bay I Show, winning the USEF Platinum Performance Talent Search and the Washington Equitation Classic (Greer won both the Hunter and Jumper Phase – way to go girl!) on her Big Eq partner Freedom. Greer also won the $10,000 Open Jumper Welcome Prix aboard Viper P. and placed sixth in the $30,000 Grand Prix of Traverse City. Photo by Robyn Keyster/PMG

Jessica Blum rode away with the Large Junior Hunter, 15 Years and under Championship on The Real McCoy at the Horse Shows by the Bay I Show. Jessica trains with Marni Von Schalburg. Looks like Jessica’s horse really is the Real McCoy! Photo by Katie Anich/PMG

Kristen Bowman, one of Louise Serio’s talented students, had excellent results in the Children’s 14 & Under Hunter division at the Brandywine Valley Summer series with her mounts Rhinebeck (pictured) and Noble Blue. During the first week, Kristen won the $500 NAL/WIHS Children’s Hunter Classic with Rhinebeck, and during the second week she won the $500 M&S Children’s Hunter Classic aboard Noble Blue, while placing second with Rhinebeck. Kristen and Rhinebeck also took home the third place prize in the THIS Children’s Medal during both weeks of competition. Talk about fantastic finishes!! Photo by Robyn Keyster/PMG

The riders of Callan Solem Show Stables had great success at the Lake Placid Horse Shows. Left to right: Rebecca Patterson; Meggin Patterson; Elle Turner; and Rose Borzillo. Rebecca and her mare Lalique earned the Modified Children’s Hunter Championship during the first week, and then the duo advanced to the next level, taking home the Children’s 14 & Under Hunter Horse Championship. Meggin returned to the ring for the first time in many months with her mare Noblesse Oblige. The pair competed in the Low Adult Jumper division where they won two classes for the championship prize. In the Children’s 15-17 Hunter Horse division, Elle and Walk On led the way, winning the Grand Champion Children’s Hunter title, after sweeping the over fences classes during the first week. Rose and Flying Dutchman won the Children’s 15-17 Jumper Championship. Congratulations to a great group of girls! Photo by James Parker/Kathy Russell, The Book LLC

Heather Holman, 15, of Ormond Beach, Florida, competed her five-year-old Trakehner mare, Harmonie NSF, at the dressage Summer Sizzler 1 show at Canterbury Showplace in Newberry, Florida. Heather and Harmonie certainly rocked the results, riding away as Grand Champion and Best Turned Out Horse for Training Level adult amateurs and junior young riders! Heather and Harmonie earned scores of 66.7% and 70.7% in Training Level Two and 69.2% and 69.2% in Training Level Three to take home three firsts and a second. “I couldn’t have gotten any of these scores without the help of my fabulous trainer, Gwen Poulin, and the help of Sarah Plante, the owner of Harmony Woods Training Center, the barn I ride at,” Heather said. Congratulations to Heather and her lovely mare, keep earning those great scores! Photo courtesy of Heather Holman 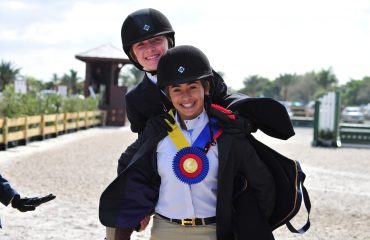 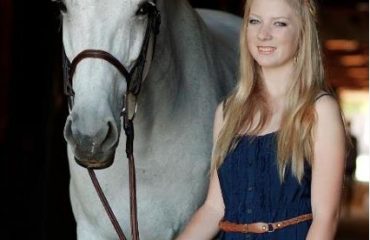 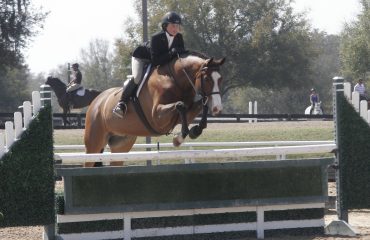