Having a Go at Playing Polo

My first real-life exposure to polo took place when I was a teenager and somehow my non-horsey parents acquired tickets to a match at Oakbrook Polo Club outside Chicago. My impressions were that I’d love to gallop on that immense green field and the audience was dressed to the nines. I’d never been to such an elegant sporting event before.

Aside from the competition itself, the highlight from that day was a chance to walk out onto the field to help replace and tamp the divots produced by the thundering hooves. I’d been to many Cubs or White Sox games at that point in my life but I’d never been invited down onto the field. The polo experience was something special!

Other than admiring the clothes in the print ads by Ralph Lauren and dining a few times at RL Restaurant off Michigan Avenue — and dreaming of converting it into my own horse-themed downtown apartment — my path didn’t cross with polo again until just a few years ago. During a Thanksgiving visit with family in Illinois, my husband Mark and I (newlyweds at the time), had the unexpected chance to face off at the sport of kings.

My then-12-year-old niece, Mattie, was regularly riding her friend’s mom’s horses that were seasoned polo ponies. My niece suggested we go to the barn to watch her ride. Bundled up in Midwest-appropriate winter gear (meaning puffy clothes consisting of many layers), we departed for the barn, Mark with camera in hand.

We met my niece’s friend from school, friend’s mom and the two polo ponies. The girls groomed and tacked their mounts and then we adults took up post at the end of the indoor arena. The girls cruised around and practiced swinging their mallets. Occasionally they made good contact on the ball, which was pretty exciting. None of this was remotely close to the blazing action I’d witnessed at Oak Brook Polo Club decades before.

There was a lot of slow trotting and when they hit the ball, it’d make halting progress in one direction or another on the arena footing. I was pretty sure if given the chance, I’d be a respectable newbie polo player given my many years in the saddle. I certainly would be better than a couple of kids.

After the girls had ridden for a while, the friend’s mom turned to Mark and me and asked, “Would you like to ride?” I had no idea this would even be a possibility! I wasn’t dressed appropriately, in my snow boots, jeans and a black beret. Mark had on a black ski cap that resembled something a bank robber in a movie would wear. There was nothing elegantly Ralph Lauren-ish about our attire, but clothing does not a polo player make! How could we say no to such an incredible opportunity?

The Natural and the Horsewoman

Before we hopped on the small Argentine ponies, the owner said they were bombproof. “They’re great horses because you can do anything with them and nothing scares them, but they don’t really have a lot of personality,” she said. This was welcome news since Mark had only ridden once before in his life. I repeat. Mark had only ridden once in his life. At a walk. On a trail ride. Many years before.

Being the veteran horse person of the family, I walked my mount several laps to get the feel of her. I then began a cautious trot while holding the long, awkward mallet. I was worried I’d clock the horse in the face. I’m really not that naturally coordinated when it comes to sports with gear such as a golf club, tennis racket or baseball bat.

Meanwhile, in the back of my mind, I thought how stupid it was to ride without a helmet. The girls’ helmets were too small to borrow. In the end, I rationalized my decision, figuring this was an aberration, not my normal practice. And besides, I couldn’t say no to this generous offer to ride the highly trained polo pony! If I did fall, my mount wasn’t that tall and she was bombproof.

As I was carefully walking a lap then changing direction trying to have perfect equitation with my jeans rubbing the inside of my calf against the stirrup leather, Mark was already cantering. He flew up one side of the ring and down the other. He hit the ball and made excellent contact. At that point I was still contemplating how I’d swing the mallet without endangering the well-being of the pony. After much maneuvering, the pony and I were aligned in the perfect spot, right next to the ball. I swung the mallet with gusto and the ball basically stood still.

Taking a shot at polo, Susan celebrates a small victory of making contact with the ball — from a walk. (Photo courtesy of Susan Friedland-Smith)

Immediately after that polo fail, Mark passed me from the other side of the arena and hit the ball. It soared through the air. It was as though he’d been playing polo his whole life.

My niece, who was on video duty, said, “Why don’t you try a canter?”

I replied, “Not with this thing in my hand,” referring to the mallet. We rode a little longer, my husband wearing a grin the entire time, wove around me, followed the ball and smacked it across the arena, then cantered on to hit it again. When he dismounted, Mark asked the owner, “How much does one of these cost?!?” He was clearly sold. The owner told him he was a natural and that we should play polo.

I knew that was a good sign for my relatively new marriage. We went home that day and watched the video footage and I was literally in tears laughing at what a terrible polo player I was and how professional the non-rider looked — despite his black bank-robber ski hat.

A year or so later for a birthday gift, Mark bought me a polo lesson. I’m happy to report that experience went much better. The instructor gave me very strategic tips for holding the mallet and making connection with the ball. By the end of the hour, I was able to hit the ball respectably. My second experience was way more fun than my first attempt. And maybe one of these days I’ll challenge Mark to a rematch. 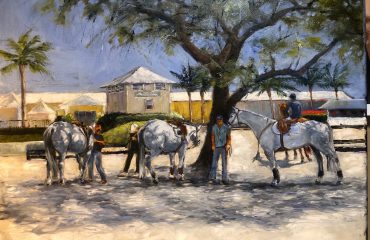 Mona Snell: Through the Eyes of an Artist & Horsewoman 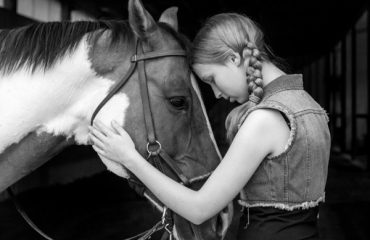 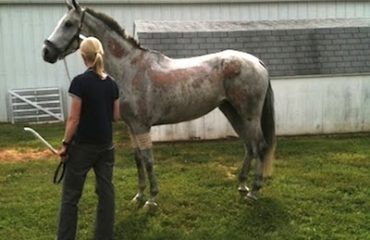