Judy Richter is the Consummate Horsewoman

Judy Richter, based at Coker Farm in Bedford, NY, is known around the horse world as a rider, trainer, clinician, judge, author and old fashioned horseperson.

Judy credits George Morris with being her major mentor.  “George gave me my first student,” says Judy.  “Sue Mutch Pinckney was really a student of George’s.  We met while I was teaching at Rosemary Hall.    I loaned her a horse for the finals and that first year she was sixth.  The second year she was second.  She was a very successful rider and a great gal.  She married Ronnie Mutch, the horseman and they ran Nimrod Farm, a first class training facility.”

A Horse of a Lifetime

Her favorite horse turned out to be the best thing that came out of her years as an English major at Smith.  Judy had a college friend whose father was master of foxhounds at Metamora Hunt in Michigan.

“Tom Wilson was a great horseman and raised his own horses; but he got sick with cancer,” said Judy.  “He wanted to make arrangements for his horses before he died.  I had become great friends with him because of my interests and he sent Johnny’s Pocket to me to sell.  We scraped all our money together and bought him, because he was just so good.  He won five grand prix in one year – that was huge in those days, the 80s.  He never had more than four faults all year.  He was just a fabulous horse.”

“Johnny’s Pocket was the horse of a lifetime – a fabulous jumper and a smart horse,” states Judy.  “Norman Dello Joio showed him for me.  Katie Monahan Prudent and Ellen Raidt showed him for me first.  JP was so talented and he had just come into my life.  The children were young.  We had just bought Coker Farm.  I rode okay; if I’d had George Morris at my elbow every minute, I would have been fine; but I had a family and the farm and the family came first.  I couldn’t spread myself that thin.  That’s why I put Johnny’s Pocket with professionals.  The horse deserved a chance to be all he could be.  I like riders to have a chance to be all they can be and I feel that strongly about the horses, too.  It didn’t seem fair to hold back such a nice jumper.  I don’t enjoy watching really talented horses wasting themselves over 3 foot fences.”

Judy’s upbeat about life in the horse world.  She would like talented horses to have a greater opportunity to fulfill their destinies. After the I:60 classes look to big to aging super horses, they need to drop down into easier divisions: Junior and/or Amateur, Adult and/or Children’s Jumpers. Competitive old horses don’t like retirement. The lower jumps are easier for them AND they are wonderful teachers. They know what they are doing and they are safe, a trait we all love.

It’s unfortunate that there isn’t more traffic between the big A shows and the local shows.  In the old days people made horses at the local shows.  You’d see everything at Greenwich Horse Show and the Fairfield-Westchester PHA show.

“Trainers like George Morris would bring a bunch of horses and riders and that would bring the level way up,” recalls Judy.  “There’s quite a divide now between A and local.  There are the HITS shows that offer something for everybody; but there are eight rings and the people never watch the grand prix ring or the working hunters.  We used to learn so much by watching the good riders on the good horses over the bigger courses.”

Judy would also like to see the big grand prix classes top out at 25 horses.  She thinks that watching 50-60 rounds tends to put any spectator to sleep.  “I love grand prix but even my eyes glaze over,” she says.  “When they get that many, they need qualifying classes and bring back the top 20-25 max on Sunday afternoon.  Same thing for big hunter classes.  The derbies are terrific; but if they ever have 60 entries, everyone’s eyes will glaze over.  People’s attention spans, especially today, are very short.  They have to have entertainment.”

As for the quality of horses, Judy thinks that the Europeans are smarter than we are:  “They’re breeding to the American tastes and they’re selling some very good horses over here.  These equitation horses are just magnificent.  I don’t know how the kids learn to ride if they have these perfect horses all the time, but a really good horse can teach you a lot.”

Judy continues to teach.  She has been working for about four years with Sam Johnston, 13, who likes the jumpers.  She takes him to Andre for a lesson here and there to make sure they are current.  At some point, there might be a trip to Devon Horse Show.  Judy thinks that Devon is in a class by itself when it comes to equitation.  “Devon has a tradition of taking all the equitation riders that enter,” states Judy.  “They do not have to qualify for Devon.  For me as a trainer from the 60s through the 90s to take kids and parents to Devon was a wonderful learning experience.  They watch all the other kids and they see the level of riding.  It makes the working students work harder and everyone tries to ride better, because with one ring they can see the other people riding.  Devon also makes people, who can afford to, want to ride better horses.”

Judy and her son Philip Richter at Devon in 2009, after his win on Glasgow, another horse of a lifetime, in the High Amateur Jumper Classic. Photo by James Leslie Parker

Parental involvement is high on Judy’s list of priorities.  She thinks that parents should drive or accompany their children to riding lessons, to be there for the good and the bad.  One of the most important elements in Judy’s long career has been sharing the show world with Philip.  “I really look forward to it when Philip shows,” says Judy.  “He doesn’t do it very often; but when he does, it’s a major highlight.  It is so much fun for me, because he’s still so keen.”  Apples, after all, don’t fall far from the tree. 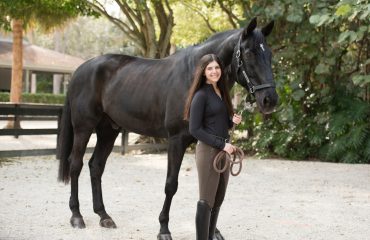 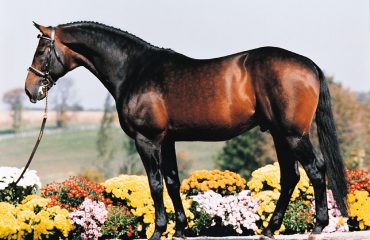