Sunday, June 09 2013 by Editor
By Sara Cavanagh   Victoria Colvin, who had dominated Junior Weekend, and Kelley Farmer, who had dominated the hunter divisions on Monday through Wednesday, on Sunday dominated the $25,000 USHJA International Hunter Derby at the Devon Horse Show and Country Fair.   Colvin, 15 of Loxahatchee, Fla., won the two round Derby on Dr.
Tagged under: archives, between the ears, beyond the track, devon horse show, devon-horse, hunter, kelley farmer, olympic sidelines, show-world, sidelines-magazine, the classic insider 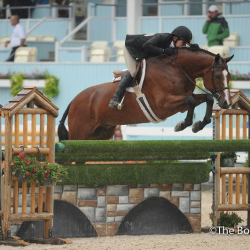 Devon – Busy Day in the Rain 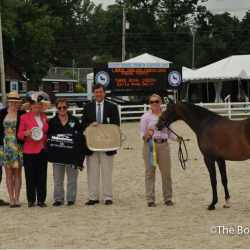 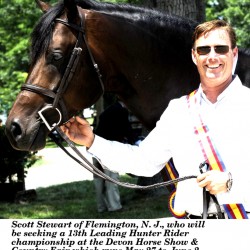 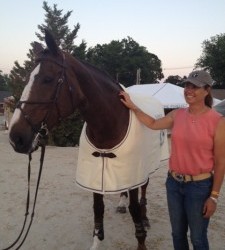 Tuesday, June 05 2012 by Editor
As I mentioned last week, I was laid up for several days with a nasty bug.  I had planned to go to Devon on Thursday night, to see everyone’s favorite chestnut mare in her special retirement ceremony, but had to skip it.  Thankfully, my friend Elise was there, and she offered to do a guest blog post for me about Thursday night’s festivities.  (This week may officially become known as Mclain Ward Week here at TTW.)  Enjoy! The Devon Horse Show. Just the name tugs at the heartstrings of every 12-year-old girl who has ever experienced the show.
Tagged under: devon horse show, entries, farms, hatchaway-bridge-farms, mclain ward, sapphire, the-barn-book, tucker the wunderkind, wordpress-org 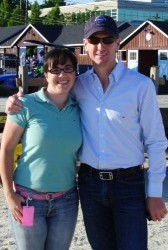 Monday, June 04 2012 by Editor
Picture this – I’m standing at the in-gate just before the course walk for the Idle Dice Open Stakes Class at Devon.  I have a Press Pass (Sidelines has hooked me up!), and I am trying to play it cool, but internally I am bouncing off the walls.  I am literally standing shoulder-to-shoulder with Beezie Madden and Margie Engle.  Everywhere I look, I see Olympic greatness.  I stand at the gate, snapping photos with my pathetic, amateurish, digital camera, at the literal legends of our sport who are counting out strides just feet from me.  It feels like I’m through the Looking Glass. Inside the Press Box, I stick out like a sore thumb.  But, I am almost just as thrilled to be shoulder-to-shoulder with real equine journalists (there are people who do this for a living, how cool is that!).  I quickly catch on that nobody really claps in there, and it’s all very routine.  They take notes, snap photos, and idly chat about how long the winner interviews will likely take.  Once again, I find myself trying to play it cool. The class ends, and I have taken dutiful notes on every round, where the rails fell, and which rides I liked.  I’ve tried to take photos, but once again the pathetic camera has utterly failed me.  (I vowed about a hundred times to upgrade that particular piece of equipment as the class went on.)  When I sat down to write this post, though, I realized nobody tunes in to Tucker the Wunderkind for class results and you’ve seen my photography skills .  Instead, check out the photos from Sidelines blogger Beth Harpham at Chasin’  - they are fantastic.  And here’s the good stuff, from my perspective. Katie Dinan did something amazing at the beginning of her Open Stakes round that I won’t soon forget.  She came to the first line, fences three and four (which, it goes without saying, were larger-than-life), and right in the middle of the line, her horse Nougat du Vallet let out a HUGE buck, about two strides out from the monster oxer that was fence four.  Katie just got him straight again and cleared the oxer with no problem at all.  They had just announced, moments ago, that she was Best Child Rider at Devon in ’09.  Just in case anyone forgot that she’s not only awesome, but also just a kid.  I was totally impressed, and vowed to remind myself of that moment the next time Tucker flicks an ear at a fly and I think it’s a good excuse to make a circle
Tagged under: bridge-farms, chasin', devon horse show, entries, hatchaway-bridge-farms, mclain ward, olympics, the-barn-book, wordpress-org