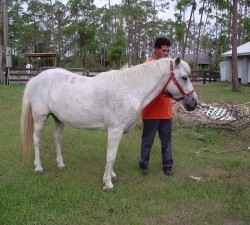 Monday, October 08 2012 by Editor
Bugsey Bugsey, a rescue, is up for adoption.
Tagged under: adventures with angelea, injecting perspective, pony-needs-a-home, rescue, tails-amp-trails, the offside, virginia, zoo 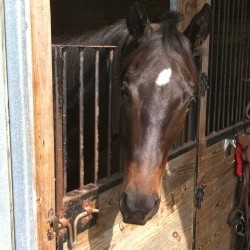 Thursday, June 28 2012 by Editor
Hi Everyone! My name is Kolleen and I am lucky enough to be involved with what I consider to be one of the best horse rescues in the country, Pure Thoughts Horse Rescue in Loxahatchee, FL. I came across Pure Thoughts last summer when I was thinking about getting back into riding after many, many, many years away from it.  I saw that Pure Thoughts was running an online auction and one of the auction items was a set of riding lessons from Brad Gaver, one of the founders and Co-Directors of Pure Thoughts.  I placed a bid and lucky for me mine was the winning bid.   After Brad assessed my riding level during my first lesson he suggested that I ride a new arrival, One Nice Offer.  One Nice Offer had just been retired from the racetrack on September 2 and he had not been trained as anything but a racehorse.  I had never before been on a horse that did not know what leg, seat and hand aids were.  Still, I managed to get him to walk and trot and even canter a few times around the ring.  After that first ride I was hooked on riding again. After riding One Nice Offer several more times I was quickly forced to make a decision.  Being a young, fit and sound horse he was sure to be adopted quickly.  It was clear that I had to adopt him or he would be gone.  The morning I showed up at Pure Thoughts with my adoption fee I had arrived literally minutes before a woman who had driven up from Miami to adopt him.  I knew, however, that I could not let this horse leave my life.  He had found a place in my heart and he is now mine. Handsome Suckie in his stall at Pure Thoughts Now on to his name.  As you know, his name is One Nice Offer, which I find to be a beautiful name.  But his barn name is … Suckie! I know! Terrible, isn’t it?? (Thank you Ms. Stacy Ferris!!).   There is a long, cute story behind that name, but Suckie??
Tagged under: bridge-farms, entries, farms, hatchaway-bridge-farms, horse, pure thoughts, rescue, the-barn-book, wordpress-org