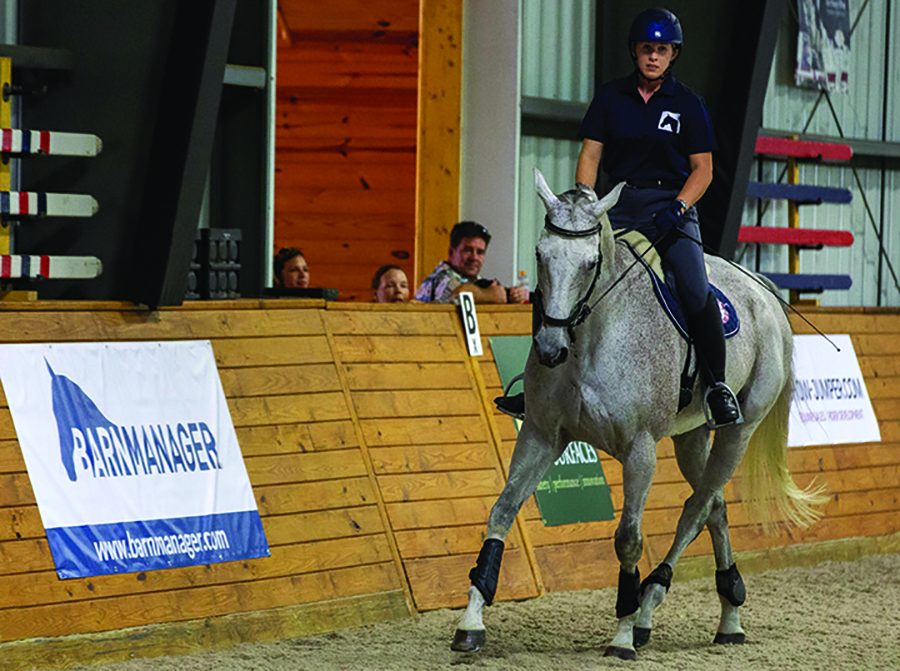 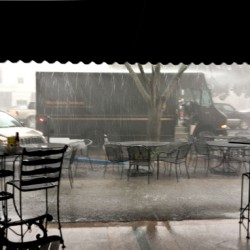 Tuesday, February 28 2012 by Website Editor
The 2012 Pine Top Farm Advanced Horse Trials organizers had one ordeal after another to deal with this past weekend.  Pine Top Farm, in Thomson, Georgia, was the scene of the area’s first Advanced competition for the season and when they realized a week or so beforehand that they couldn’t run everyone in the three phases in the daylight, they had to notify 280 riders that the Dressage and Cross Country phases of Advanced had been moved to Friday.  Then Friday opened with a Tornado watch and a Severe Storm Warning.  Dressage went on as scheduled but then the skies opened up with such a torrential downpour that riders, horses and grooms sought shelter in trailers and barns hoping that the roofs didn’t blow off.  In fact, some distance to the north exactly that happened.  Again, the organizers were notifying everyone of a change to the schedule – Cross Country was now moved to Saturday:  look at the order of go published on the internet, subtract two hours from the Friday time and off you went.  Organizers scrambled for volunteer fence judges but the event went off as planned. The view from the inside of the Aiken Brew Pub during Friday's storm. High winds and hail brought down trees and then the electricity. Saturday dawned bright, crisp, with low humidity and the clear blue skies for which this area of the south is known. One of the early jumps of the day, successfully cleared, a stroller sans baby.   A view of 19 and 20A,B and C and 21 on the Advanced cross country course.
Tagged under: adrotate, archives, chasin', erin-gilmore, hitchcock-woods, onward, upward, paradise-recent, pennsylvania, pine-top, september-2010, weather 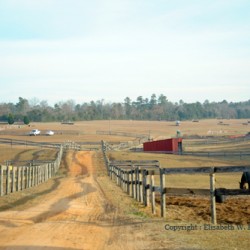 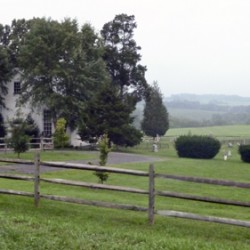 Tuesday, September 13 2011 by Website Editor
With the soggiest August on record behind us and the second week in September requiring the evacuation of Wilkes-Barre, Pennsylvania and other cities along the Susquehanna River because of the continuing rainfall, a window of opportunity briefly opened Monday, Labor Day, to officially kick off the start of cubbing with Mr. Stewart’s Cheshire Foxhounds (Unionville, Pennsylvania) under a cloudy, but dry, sky.  Members of the Hunt parked their rigs at St. Malachi Church, an ancient chapel high on a hill overlooking the Buck and Doe Run  Valleys.       From there, riders hacked to the front lawn of Runnymede, a farm that includes strenuous hills and wide, open meadows.
Tagged under: adrotate, erin-gilmore, february-2011, november-2010, september-2010, weather, wordpress-org, young-entry 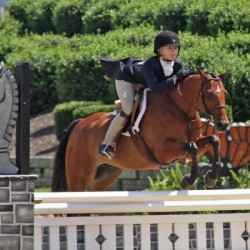 Thursday, August 11 2011 by Editor
Lexington, KY – August 10, 2011 – The 2011 United States Equestrian Federation Pony Finals continued today at the picturesque Kentucky Horse Park with the conclusion of the Green Pony Hunter divisions. Ponies and riders from each division completed their over fences phases, competing for the top honors as well as the championship and reserve championship titles. At the end of the day, Kirklen Petersen and Magical Diamond claimed the Green Pony Hunter Grand Championship title after winning the Medium Green Pony Hunter Over Fences and the Medium Green Pony Hunter Championship. The first class of the day for the USEF National Hunter Pony Championships, presented by Sallee Horse Vans, was the Small Green Pony Over Fences. Emma Lemke and Chatterbox, owned by Frank Hernandez of Cordova, TN, jumped to the top of the leaderboard with scores of 85, 82, and 85, taking home the blue ribbon prize. Lindsay Levine and Bit of Laughter, owned by Scott Stewart of Wellington, FL, followed in the second place position after earning an 83, an 83, and an 81. The third place ribbon went to Emma Kurtz and Quicksilver Butterfly, owned by Kate Taylor of Pittsford, NY, who received scores of 84, 79, and 80
Tagged under: adrotate, chasin', dressage-gold, erin-gilmore, injecting perspective, january-2010, kentucky-horse, magical-diamond, november-2010, onward, upward 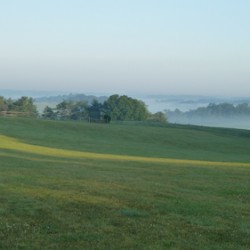 Thursday, July 14 2011 by
Young foxes are tumbling out of the den, playing with grasshoppers, learning the ways of their neighborhood. So it goes with foxhounds who were born last year, making their debut with the pack and following their elders who mastered the intricacies of the chase in prior years. The Huntsman and Whipper-In have worked with the puppies since the day they were born, teaching them rudimentary manners
Tagged under: adrotate, chasin', entries, erin-gilmore, gilmore, gilmore-sidelines, magazine, sidelines-magazine, the-barn-book 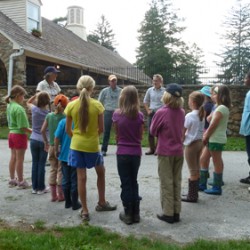 Thursday, July 07 2011 by
A pack of eight and a half couple (children, not hounds) met on the kennel lawn early mornings this past week to learn the basics of Foxhunting.  Led by the Huntsman and the Whip, the pack learned basic hunting etiquette, how to avoid accidents in the field (holes, slippery roads and wire fences) and the language of the hunting horn in the classroom, improving their riding cross-country and over jumps in mounted sessions.  Riding abilities and reasons for loving the sport ranged widely but the group was united in its enthusiasm.   Cheshire campers are introduced to Ivan Dowling, Huntsman, and Stephanie Boyer, Whip, at the Kennels. "Aunt Wendy" ("Grandmom" to one camper) ably led the group through introduction to the staff and hounds, supported by a large contingent of volunteers from the community. Ivan Dowling, Huntsman, talked about the hounds before releasing them from the kennels onto the lawn.
Tagged under: adrotate, chasin', entries, erin-gilmore, gilmore, gilmore-sidelines, magazine, sidelines-magazine, the-barn-book, wordpress-org 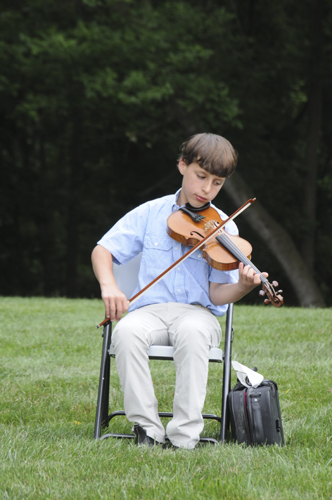 The Delaware Valley’s Own

Saturday, June 25 2011 by Editor
The other evening the Delaware Valley Point to Point Association wrapped up its competition schedule with a dinner party, an impromptu fiddle concert and end of the season awards under the stars, which you could see until the thunderstorm arrived. Picnic on the lawn at the home of Don Cochran and Pat Branniman
Tagged under: adrotate, entries, erin-gilmore, gilmore, gilmore-sidelines, lauren gallops, magazine, sidelines-magazine, the-barn-book, wordpress-org 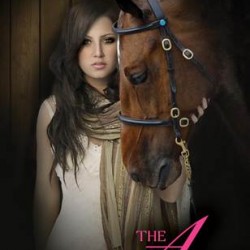 Friday, June 17 2011 by Editor
With all the energy dedicated lately on such gloomy matters as FEI complacency and airborne diseases , On the Line gratefully turns to a much lighter subject this week.
Tagged under: adrotate, bridge-farms, cheval-photos, entries, erin-gilmore, magazine, on the line, photos, photos-erin, sidelines-magazine, wordpress-org 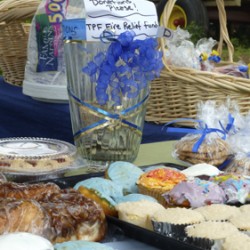 Sunday, June 12 2011 by Editor
Two weeks ago tonight a fire destroyed the barn housing horses trained by Boyd Martin on the ground floor and employees on the second.  In the days that followed the community was numb with the aftermath, the loss of lives of horses, the injuries, the immediate need of the human survivors for a somewhere to live and something to wear.  Everyone knew someone intimately who had lost something dear.  Ever mindful of the irreplaceable, friends moved into action to take care of the practical.  Among many others throughout the country, a “boots on the ground” fundraising effort was begun in anticipation of the Horse Trials planned for Plantation Field in Unionville this past weekend.  Phone call and email solicitations for contributions to a bake sale were sent out and resulted in a table overflowing with cupcakes, snickerdoodles, cake and brownies.  Priced to sell at “donation”, business was brisk and resulted in a first day total of over $1000.  The second day recovery is as yet uncounted.  I personally ate a brownie with peanut butter drizzle, its purchaser informing me that it was a $40 tray of brownies – worth it?  Quite tasty.
Tagged under: adrotate, entries, erin-gilmore, gilmore, gilmore-sidelines, magazine, sidelines-magazine, the-barn-book, wordpress-org