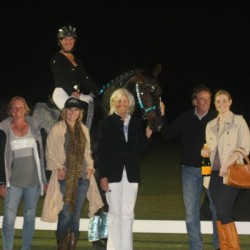 Thursday, March 08 2012 by Editor
Sidelines publisher Samantha Charles steps in as media judge Wellington, FL-March 8, 2012-  The night was filled with surprises as the fourth week of Dressage Under the Stars got underway at the Palm Beach Polo and Hunt Club. The skies opened with torrents of rain; however, the riders were not fazed as they continued to perform and impress the panel of judges, and the crowds were not deterred as the stands were nearly filled to capacity. Jennifer Baumert, the winner of last week’s dressage event, emerged victorious once more as she and her mount Don Principe earned straight 10′s from the judges and the first perfect score of the season. Last week, Baumert, a USDF Bronze, Silver and Gold medalist, exhibited a 10-year-old Hanoverian adorned in a red bandana as she performed tempis to Johnny River’s “Dang Me” and canter pirouettes to Roger Miller’s “England Swings.” The cheer that erupted from the crowd was mimicked again last night as Baumert took center stage and stole the show aboard Don Principe. The pair was decked out in blue glitter and not a inch without a touch of pizzazz as their costume reflected the dazzling lights to another country/electronic performance
Tagged under: advanced-young, archives, chasin', december-2009, december-2010, dressage, february-2010, heidi-lengyel, olympics, on the line, what's happenin', wordpress-org 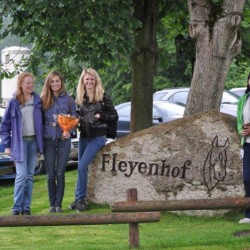 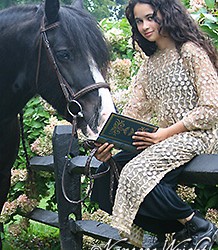 Monday, February 27 2012 by Editor
Riders read and Pin Oak Charity Horse Show encourages reading in the greater Houston Community through  The Literary Horse: When Legends Come to Life Exhibit by Vanessa Wright, a pairing of photographs of today’s horses and riders with quotations from the world’s greatest book. (Houston, TX) – Does Black Beauty live at the end of your street? Does Pegasus take wing from the pasture around the corner?  Explore  The Literary Horse: When Legends Come to Life  equine photography exhibit to find out!  From Achilles receiving his immortal chargers to Don Quixote’s farewell to Rocinante, literature is full of unforgettable stories and poetry about heroic horses and horse-people.
Tagged under: december-2009, houston, november-2010, olympics, on the line, september-2010, team-usa-poster-contest, the-barn-book, upward-archives, winter-dressage 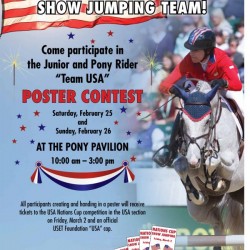 Friday, February 24 2012 by Editor
[Wellington, FL]  As Nations Cup Night draws near, the United States is calling on all fans to show their support. This weekend, Saturday February 25 and Sunday, February 26, Junior and pony riders are invited to create and submit a poster for the “Team USA Poster Contest.” Poster supplies will be available in the Winter Equestrian Festival Family Center located near the pony rings from 10:00 AM to 3:00 PM
Tagged under: december-2011, february-2012, injecting perspective, november-2011, olympics, on the line, onward, upward, the-barn-book, upward-archives