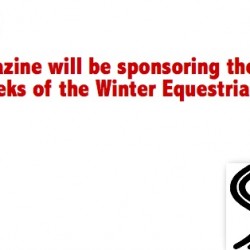 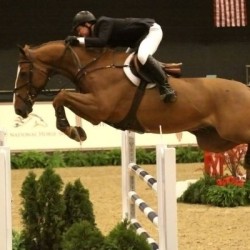 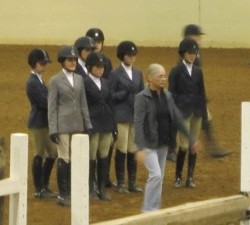 Win a “Course Walk” with a Grand Prix Rider at the Washington International Horse Show!

Monday, October 22 2012 by Editor
By Jan Westmark-Allan WIN a “Course Walk” with a Grand Prix rider at the Washington International Horse Show!! If you live in the Washington, DC area you might already know that the Washington International Horse Show (WIHS) is a big deal!! The show takes place at the Verizon Center, October 23 – 28 and this year they celebrate their 54th show! Sidelines Magazine is a strong supporter of the WIHS, and we are also a strong supporter of FUN THINGS TO DO!!! That is why we are giving you and a friend a chance to win a “Course Walk” with a Grand Prix rider on Saturday night the 27th at 6 pm at the WIHS.
Tagged under: adventures with angelea, course-walk, fun, grand prix rider, higher education, horse show, president, university 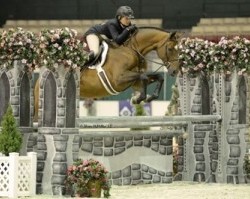 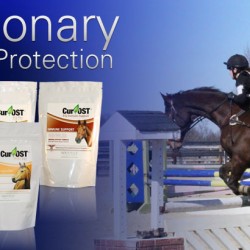 Nouvelle Veterinary, Inc. is Proud to Announce the Addition of Two New Products to their Equine Lineup!

Thursday, August 30 2012 by Editor
Nouvelle Veterinary, Inc.’s new Cur-OST® PURE EQ is a proprietary blend of potent levels of Curcumin 95%, Boswellia 65%, Vitamin C and CoEnzyme Q10 to tackle critical pain and inflammation quickly.  The new PURE EQ is focused on severe pain and inflammation associated with a variety of conditions and has been shown to be very effective in aiding in the management of acute and chronic laminitis as well as joint problems.  Results have been seen in preliminary trials in as little as 5 days in many cases.  In most instances, once the patients have responded and shown improvement, they can be switched to our EQ PLUS or EQ Green product for long term support.  Inflammation is at the root of many clinical conditions including arthritis, tendon injuries, poor immune health, laminitis, navicular syndrome, COPD and EIPH.  If you want to improve recovery, you must control the inflammation. Cur-OST® EQ products are the only line of supplements available that completely address the inflammatory process. Our new Cur-OST® Immune & Repair EQ product is an enhanced immune support formula combining micronized mushroom derived beta-glucans with essential amino acids; L-Glutamine, L-Carnitine and L-Arginine.  Various mushroom beta-glucans have been shown in research trials to enhance immune activity by stimulating lymphocyte, natural killer cell and dendritic cell function, aiding in recovery as well as protecting overall health.  L-Glutamine is a conditional essential amino acid that has been shown to not only improve overall immune function, but protects against oxidative stress, improves cellular function and intestinal health.  L-Carnitine aids in the mobilization and utilization of various fatty acids for improved energy production as well as cellular function.  L-Arginine is a precursor to the production of Nitric Oxide, which may improve or enhance blood circulation throughout the body.  The Immune & Repair formula has been utilized to support overall immune health, recovery during times of infection and support during times of stress, but has also shown benefits in recovery from various injuries and chronic lameness conditions
Tagged under: equine, green, higher education, horse show, in the irons, management, nouvelle-veterinary, tails & trails 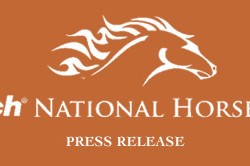 Friday, August 24 2012 by Editor
Don’t Miss 2012 London Olympic Gold Medalist Nick Skelton   and Other Olympic Veterans October 23-28 at Verizon Center Washington, D.C., – August 23, 2012 - The Washington International Horse Show (WIHS), is pleased to announce that tickets are now on sale for its 2012 competition, running October 23-28, 2012, at Verizon Center in downtown Washington, D.C. Full ticket information can be found by visiting www.wihs.org/tickets/ . The WIHS is one of the most exciting equestrian competitions in the nation, and spectators are welcome to join in the festivities during the week to watch show jumping at its best, the beautiful hunters, and the best up-and-coming junior riders in the country
Tagged under: chasin', education, february-2011, france, horse show, september-2010, september-2011, show world, the-barn-book 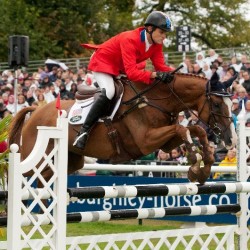 Sunday, September 04 2011 by Editor
Lexington, KY  - There are incredible stories and then there is the story of the 2011 Land Rover Burghley Horse Trials. Not only did William Fox-Pitt ride Parklane Hawk to a record sixth win of his career, but a little American horse named Neville Bardos defied every possible odd to finish seventh in the world’s toughest four-star. Fox-Pitt and the New Zealand Thoroughbred added one time fault in the show jumping to his dressage score in an otherwise flawless effort over the four days of competition. His dressage score of 39.7 was good enough for second place after the first phase but when overnight leader Simone Dietermann fell off Free Easy NRW on the cross country, Fox-Pitt inherited a lead he then defended with style. But the story of the competition continued to be a scrappy little failed racehorse from Australia. Neville Bardos fulfilled Boyd Martin’s dream of competing at Burghley and with his tenacity and bravery put a nightmare of a summer behind his family. A barn fire ripped through Martin’s barn in May, and Neville Bardos was trapped in the fire the longest of those horses that survived
Tagged under: collecting, december-2009, history, horse show, horse-trials, horses-on-cross, neville-bardos, on the line, rover-burghley, september-2010, upward-archives 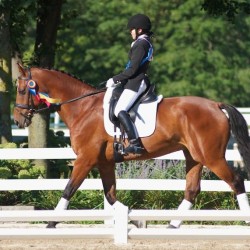 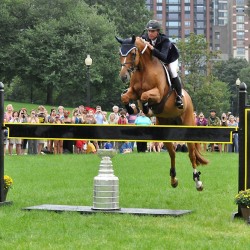 Friday, August 26 2011 by Editor
Boston, MA, August 25, 2011 :  At the second annual Putnam Boston Equestrian Classic Preview Party, Bruins Principal, Charlie Jacobs made history aboard his mount Quidditch II after jumping the coveted 118-year-old Stanley Cup trophy on Boston Common today.  It was a surprise to the enthusiastic and substantial crowd of spectators that had gathered to view this once-in-a-lifetime event.  Mayor Menino and his staff were in attendance to support this historic occasion.  The outdoor event was a preview to the main event taking place September 8 – 11, 2011 at the prestigious Myopia Hunt Club in Hamilton, MA. Charlie Jacobs, Principal of the Bruins aboard his mount Quidditch II, makes history by jumping the 118-year-old Stanley Cup to preview the Putnam Boston Equestrian Classic. Photo ©Glenn Kulbako of KulbakoPhoto.com Olympic Gold Medalist and native Bostonian, Peter Wylde flew in from a recent competition in Germany to add to the majesty of the show jumping component.   “What an amazing event, the rain held off and Charlie surprised us all.  Being home to jump on Boston Common was personally gratifying for me,” said Peter Wylde, Olympian.  Other world-renowned equestrians that rode the course were two-time Olympic Medalist Leslie Burr Howard, international champion Schuyler Riley, up-and-coming talent Nick Della Joio and accomplished rider and trainer, Bill Lowry. The event benefited the Boston Park Rangers Mounted Unit, the equestrian troop responsible for policing the nine parks throughout the city known as the Emerald Necklace. Despite threats of rain and thunder storms, the event went off without a hitch and concluded with a successful fundraiser reception on the elegant Roof of the Taj Boston hotel honoring the Park Rangers. ______________________________ About the Putnam Boston Equestrian Classic: The 2011 Putnam Boston Equestrian Classic is an Olympic-caliber show jumping event that will be held from Thursday, September 8, through Sunday, September 11, 2011 at the Myopia Hunt Club in Hamilton, Massachusetts. For the second consecutive year, Putnam Investments will serve at the title sponsor for the event, which has a top prize of $50,000 for its showcase Grand Prix event, an increase from last year’s $30,000.  The Putnam Boston Equestrian Classic is planning a 9/11 tribute with local firefighters, jousting, skydiving, cabaret singing, boutique shopping, ladies hat contest and the much anticipated, Patrons Luncheon
Tagged under: adrotate, championships, chasin', december-2010, february-2011, green, horse show, keenan-dominate, november-2010, what's happenin'